Putting the “F” Word in Your Marketing Campaign

Ok, it’s not what you think. There are plenty of other words in the alphabet that begin with the letter “F”, but I got your attention.

FUN. That’s what I’m talking about.

Early in my career, when women used an entire can of Aqua Net in their hair to go on a date with a dude dressed straight out of Miami Vice (you know the decade), I worked for a small creative firm based just outside of Boston. They specialized in advertising and graphic design.

After about a month, I hit it off with Russ, one of the lead designers, and he took me under his wing. One day, Russ pulled out some ads that were spray mounted to a display board. He asked, “What is wrong with these ads?”

I carefully scanned them and thought, these are so boring, but I did not want to criticize. I was the new guy. I thought to myself, Is this a test? Will he hate me if I say they stink?  Finally, my mouth opened and the words came out, “They are kind of weak.”

Russ looked at and me and laughed, “If that’s a nice way of telling me they suck, you are spot on, Young Doug. These ads lack an element of fun and real creativity. You only have a split second to grab someone’s attention, so make sure you use stunning graphics and headlines that will make someone want to read the copy. Make it FUN and engaging, and you will have won half the battle.” These are words I still live by.

With great fun comes great responsibility (sounds like something out of a Spiderman movie). You have to know the difference between fun and offensive. Back in the late 90s, I had the opportunity work with an award-winning creative director. To this day, he is still one of the biggest influencers on my career and the most creative guy I have had the privilege of knowing.  He was a painter, sculptor, cartoonist, published writer, and boy, did he like to skirt the line of humor.

I remember one particular direct mail campaign we developed back in January of 1998. The movie Titanic had just been released and we had developed a pre-show mailer for an upcoming tradeshow in Germany. The front was a full color cartoon. In the background, the Titanic was sinking and in the foreground there were two men in a lifeboat, one of them pointing to his watch. The caption read, “At least we have time to make it to EuroShop to see all the latest products from McCue Corporation.”

This mailer generated so many positive responses. We received emails from customers saying it was our best campaign yet. Sales reps mentioned that while visiting customers many of them would pull out the mailer and laugh or show it proudly tacked to their cubicle wall. We were high-fiving and riding the wave for about three weeks. Then I got the call. A customer left me a voice mail saying she was very offended by the mailer and felt it was in poor taste to poke fun at such a tragedy. My creative director’s response, “It happened like 100 years ago. Get over it.”

I immediately called her back to apologize and explain that in no way were we trying to make light of the tragedy, but more so joking about the Titanic movie since it was the number one movie at the box office. The call quickly diffused the situation. We had a good laugh and re-gained a happy customer. From that day forward we always looked at everything we created and asked ourselves if what we were creating could potentially offend anyone in some way? We called it Rule #7 (because there are seven letters in the word TITANIC), and if not used wisely, it could sink us. 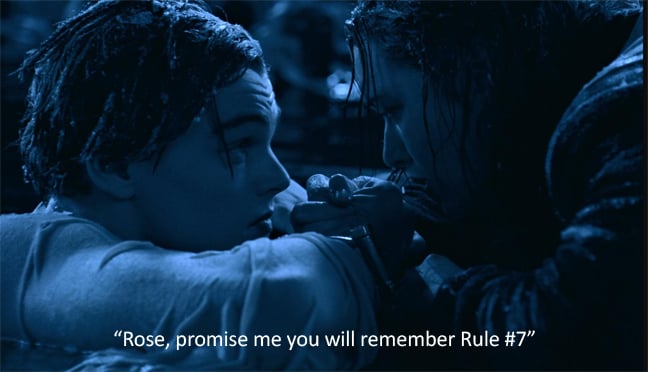 Today, this simple concept of using fun is still part of my daily creative process. Sure, we now use email marketing campaigns, social media, and blogs, but keeping things fun is more relevant than ever. Fun and engaging content within the context of your brand will generate interest in your company. It will help with lead generation, increase your social media followers, and leave a lasting impression with your customers because you are connecting with them on a level that every human being understands.

When developing your next marketing campaign, try and use these simple rules:

If your target audience likes your brand, because they can tell you are passionate about what you do through your humor and creative content, then you have truly won the race and perhaps even gained a customer for life.

HOW CAN WE HELP?